Speech of Rudij Bergmann at the dedication of the memorial on November 9, 2014

No memorial – no historical monument – no memorial monument – no work of art can heal the wounds of the world that mankind has inflicted upon itself. Works of art are not symbols of expiation or even letters of indulgence in order to obtain forgiveness surreptitiously. Tracks of blood cannot be blurred by art. The blood remains on the streets even if we do not see it anymore.

Shame cannot be undone by art – this also goes for the Nazi outrage that took place against the Jewish citizens at such quaint places like Großsachsen and Leutershausen.

I know quite well that the 27 murdered victims were not sent – or rather, chased – to death from this local synagogue square. These people were forced to leave their home villages, still delusively hoping that they would find better shelter elsewhere besides home. Like that or similar.

This is why we are here today, because their hope is understandable, but delusive, and to remember those 27 people to whom Myriam Holme’s sculpture is dedicated…

… A wonderful work of art. And as nearly all works of art, this sculpture is not just any art – G-d forbid! – and therefore not to be interpreted on a whim. Rather, it has different levels of interpretation: Holme’s work is a memorial – a historical monument – a memorial monument, all in one.

What we see at first sight are three polished brass bars, weather-proofed, that rise about four meters into the sky. Not bolt upright, as you might imagine. In the last third, they bend outwards, as if they diverge. It seems as if they turn away from the other brass bars, reminding us of a “tree trunk” overall.

Myriam Holme, who has an alchemical sense to her art, lets “treetops” of various sizes grow from the apparent tree trunk. If you keep the sculpture in perspective, the artist, who by the way also works as a visiting professor at various art academies, extends the three brass bars through the other bars, also made of brass.

Six. Twelve. Nine bars. 27 altogether. This is the known number of Jewish citizens that perished in concentrations camps. Six people from Großsachsen, and nine plus twelve came from Leutershausen. At that time, they were independent communities.

This sculpture, this memorial monument, reminds us of this fact in a clear, but sensitive manner. And this is exactly the task of Holme’s sculpture of reflectiveness – and this is precisely a memo-rial: yet an object of reflectiveness. However, reflection cannot be enforced. Holme’s work does not overwhelm the observer, but it welcomes him or her. Hence, the sculpture is also an invitation for those that thus far had no eyes to see, no ears to hear, and no heart to feel…

This sculpture is no “great hue” – although no doubt, this is sometimes necessary. But rather the work is a setting which simply exists and cannot be pushed aside so easily. There is always the underlying question about the “why” of this sculpture. About the reason. About the 27 that never returned, but that are now somehow there. Now – are here. Holme’s memorial made room for them – or it can at least stimulate us to think about those whom we are thinking of today: thanks to the sculpture. Thanks to art.

Even though I can associate chalices or tulip blossoms with the so-called treetops, there is still the thought of a menorah, plural menoroth, which is obligatory, especially in a place like ours. And just that is the intention of Myriam Holme and it corresponds with the commemorative plaque designed by her, which shows all 27 names assigned to the according menoroth. Sculpture and commemorative plaque belong together.

Normally, people think of a seven-branched candleholder as a menorah, which is one of the most important and oldest religious symbols of Judaism. According to tradition, G-d gave Moses detailed instructions about how the menorah should look like. The menorah then accompanied the children of Israel on their 40 year pilgrimage through the desert and later found its place in the temple.

It is a clever idea to use an artistic form that reminds us of a menorah without stating to be one… but it is also a respectful bow to belief and tradition towards of all those because of whom they were infamized, banished and killed in Nazi-Germany.

To consciously search in the vicinity of the menorah is, however, a necessary artistic tightrope walk that connects content with form. It protects the issue from being too openly interpreted and binds to the sculpture: The artist reduces any misinterpretation of the sculpture to a rough guess. Into vagueness. Into arbitrariness. Into triviality. By only just through the association of the menorah, Myriam Holme draws a fence – symbolically speaking – around the memorial.

The artist’s task was to create a memorial for the Jewish victims of National Socialism from Hirschberg. It is good. It is right. And it is great work anyhow.

A memorial, which in our specific case means the hortative memory of 27 destroyed lives that used to be at home in what is now known as Hirschberg. But one should not think isolated of the 27 destinies. The free menorah forms, especially the diverging sideways, represent the connection: They remind, they serve as a warning of the disrupted bands of a once strenuously grown German-Jewish community in the city and urban areas. It was one of the causes and patriotic reasons for German-Jewish soldiers to participate in the First World War. For the German Fatherland…

The Rhein–Jewish born Heinrich Heine dreamt of the German Fatherland when he gave his most beautiful folk song to his home country as a gift: the “Loreley”. In 1832, Heine wrote a poem about his broken dream while in exile in Paris:

The poet’s dream, which many German Jews dreamt despite warning signs, turned into a nightmare due to the Nazis and their authorities.

And this is the reason why,

We are here today. It is another reason why Myriam Holme’s sculpture exists.

Certainly, the first bidding of the sculpture is to admonish the past. The past is never dead and gone, even if we would like it to be. It sneaks back into our awareness and often returns back inconspicuously. Unfortunately, there is too much anti-Semitism and racism  today or, as Berthold Brecht quoted: “The womb is still fertile…..(for such actions).”

But it is not all about the past, but also the present and the future: To remind us to take action against it, not only politically, but also personally. This is the second commandment of Holme’s sculpture. There could be an invisible quotation of the Talmud above it: The one that rescues another, rescues all mankind in this moment.

Additionally, the diverging bars remind me of the irretrievable loss. This irretrievable loss is the immeasurable diversity of the German–Jewish, the European–Jewish culture which was destroyed by the National Socialists and their willing helpers that they found everywhere. By destroying people. To the horror, we could also add anger, or at least the question:

The question of where would be the Europe of today, shaken by more and more crises, if not for the Jewish people with their various talents and their intellectual and economic resources. And still used today for the sake of the continent. Clearly, it is a futile question: Avant perdu….

Let’s turn to the bright side: The menorah – symbolizing the light with its seven flames that shine for mankind. A light-tree of sorts. It is often connected with the thuja, which stands for wisdom, justice and grantable wishes in the “dictum Salomon”.

Thuja or tree of life seems to be a suitable title for Holme’s sculpture that does not only accuse and forewarn, but also pleads for life. Otherwise, its similarity to the menorah would be misleading… and it would miss its intention.

Art in public places – and the synagogue is a public location for many diverse occasions – normally only has an impact when it not only does not limit, but gives another impulse, a new quality, or adds a new “life quality”. It gives another reason to visit it. To visit the synagogue square that has the name of the former cantor of the Jewish community here: Meier Heller.

Holme’s art work is an invitation to stay for a while. Alone or with others. A wonderful village square, and in its imaginary center, a sculpture as a place of memory and a meeting point. A goal for strollers. Angry. In love. Thinking. Strolling. Just married. Curious. For sad and happy people. For families. For young and old. For visitors or locals. But also for, not least, the descendants of the exiles. Some of them, thanks to their noble act of friendship, came from the US to participate in the inauguration of our memorial here today.

The memorial is a lasting place to welcome and to meet: This would be wonderful, useful and full of live. It is my wish for Myriam Holme’s sculpture – and for the community of Hirschberg and the working team “Former Synagogue Leutershausen” that have sent a message with this “life tree”. You should grow with it – and please do not hide it under the bushel.

Thank you for your attention.

The translation of the Heine quote is:

I once had a beautiful Fatherland…
It kissed me in German and spoke in German…: “I love you.” –
It was a dream. 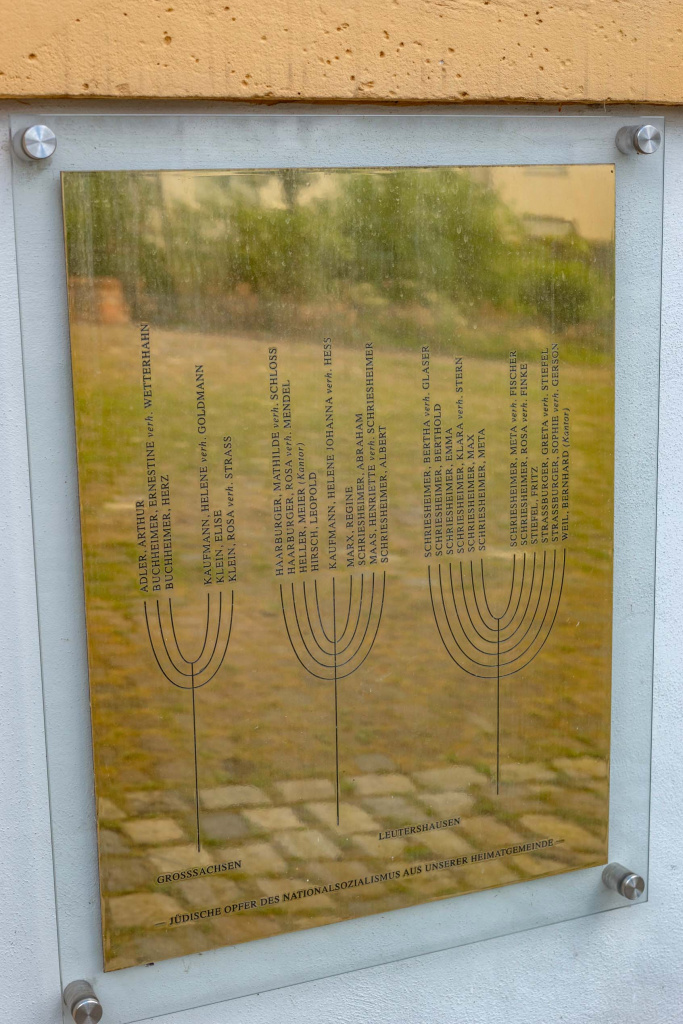